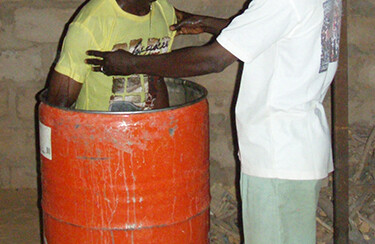 Kevin Colvett, Jerry Atnip and Jon Lee went to an undisclosed location (to protect those involved) last year with James Forelines from Final Command Ministries in order to explore the developing partnership between the Living Water Project and FCM (Living Water accompanying FCM church plants with wells).  FCM's mission is to make disciples of Jesus using the Disciple Making Movement "method" of bible study, and their major focus now is in North Africa.  It's a brutally hot part of the world, so water is a true commodity there.

This part of the world is very hostile and violent to Christians and especially anyone openly sharing or practicing their faith. The pastor in one of the communities had been forced out of his prior home village because of his faith, and someone killed his dog (to send a message) shortly after his arrival in the town.  But still, he continued to serve in faith and joy.  “This guy's one of the most joy-filled people I've met - especially considering what he and his family have gone through,” Jon Lee said.

The Living Water Project funded a well in that village shortly after their visit, and a few weeks after that they got an e-mail from the pastor saying that four people in his community had decided to follow Jesus.  A young woman was first. Her family treated her horribly when they found out of her decision; but after she shared the Gospel with them, the other three soon decided to be baptized. Under the protection of night, the four of them were baptized in barrels with the water from the very well that Living Water and Final Command Ministries had worked to build.